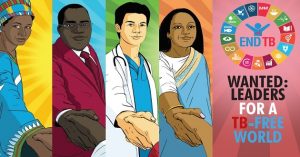 Each year we commemorate World TB Day on March 24 to raise public awareness about the devastating health, social and economic consequences of tuberculosis (TB) and to step up efforts to end the global TB epidemic. The date marks the day in 1882 when Dr. Robert Koch announced that he had discovered the bacterium that causes TB, which opened the way towards diagnosing and curing this disease.

Despite significant progress over the last decades, TB continues to be the top infectious killer worldwide, claiming over 4 500 lives a day. The emergence of multidrug-resistant TB (MDR-TB) poses a major health security threat and could risk gains made in the fight against TB.

The theme: “Wanted: Leaders for a TB-free world”
The theme of World TB Day 2018 – “Wanted: Leaders for a TB-free world”- focuses on building commitment to end TB, not only at the political level with Heads of State and Ministers of Health, but at all levels from Mayors, Governors, parliamentarians and community leaders, to people affected with TB, civil society advocates, health workers, doctors or nurses, NGOs and other partners. All can be leaders of efforts to end TB in their own work or terrain.

This is a critical theme, given the political importance of the upcoming UN General Assembly high-level meeting on TB this year, which will bring together Heads of State in New York. It follows on from a very successful Ministerial Conference on Ending TB in Moscow on 16-17 November, 2017 which resulted in high-level commitments from Ministers and other leaders from 120 countries to accelerate progress to end TB.

World TB Day provides the opportunity to shine the spotlight on the disease and mobilize political and social commitment for accelerate progress to end TB.

Last year, WHO reported that 10.4 million people fell ill with TB and there were 1.8 million TB deaths in 2016, making it the top infectious killer worldwide. This disease is deeply rooted in populations where human rights and dignity are limited. While anyone can contract TB, the disease thrives among people living in poverty, communities and groups that are marginalized, and other vulnerable populations.

These include: migrants, refugees, ethnic minorities, miners and others working and living in risk-prone settings, the elderly, marginalized women and children in many settings etc. Factors such as malnutrition, poor housing and sanitation, compounded by other risk factors such as tobacco and alcohol use and diabetes, affect vulnerability to TB and access to care. Furthermore, this access is often hindered by catastrophic costs associated with illness, seeking and staying in care, and lack of social protection, resulting in a vicious cycle of poverty and ill-health. The transmission of multidrug-resistant TB (MDR-TB) adds great urgency to these concerns.