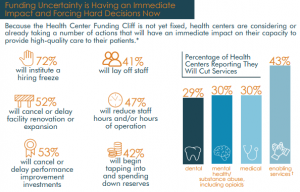 Because Congress did not extend the Community Health Centers Fund (CHCF) by October 1st, every Community Health Center faces drastic reductions in their federal funding at the beginning of their next budget period. With no fix, health centers face a 70% cut to this grant funding. Because the direct cuts to federal grants do not take place immediately, some policymakers are under the inaccurate impression that the cliff will not impact health centers until January.

In fact, the funding cliff is already creating disruption, and funding uncertainty is forcing cutbacks and operational instability now. For example, even before October 1st, 26% of health centers report that the potential for the funding cliff had already made it harder to recruit and retain staff.*

Infographic: The Health Center Funding Cliff is Disrupting Access to Care Now– Share it with your legislators! Make the case for health centers.

Health centers across the country are still facing a 70% funding cliff.  We must continue to demand that Congress takes action to fix the health center funding cliff and protect the vital services they provide to 27 million patients. This week, call both of your Senators and your Representative in Congress, demanding action on the cliff. Make the health center voice impossible to ignore. ACT NOW: